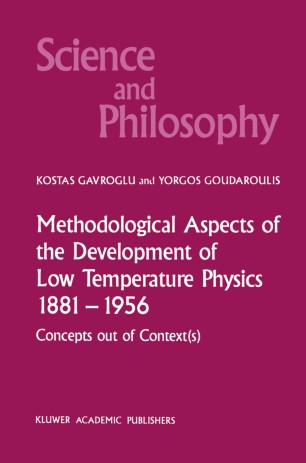 Methodological Aspects of the Development of Low Temperature Physics 1881–1956

Concepts Out of Context(s)

Part of the Science and Philosophy book series (SCPH, volume 4)

This book is primarily about the methodological questions involved in attempts to understand two of the most peculiar phenomena in physics, both occurring at the lowest of temperatures. Superconductivity (the disappearance of electrical resistance) and superfluidity (the total absence of viscosity in liquid helium) are not merely peculiar in their own right. Being the only macroscopic quantum phenomena they also manifest a sudden and dramatic change even in those properties which have been amply used within the classical framework and which were thought to be fully understood after the advent of quantum theory. A few years ago we set ourselves the task of carrying out a methodological study of the "most peculiar" phenomena in physics and trying to understand the process by which an observed (rather than predicted) new phenomenon gets "translated" into a physical problem. We thought the best way of deciding which phenomena to choose was to rely on our intuitive notion about the "degrees of peculiarity" developed, no doubt, during the past ten years of active research in theoretical atomic and elementary particle physics. While the merits of the different candidates were compared, we were amazed to realize that neither the phenomena of the very small nor those of the very large could compete with the phenomena of the very cold. These were truly remarkable phenomena if for no other reason than for the difficulties encountered in merely describing them.