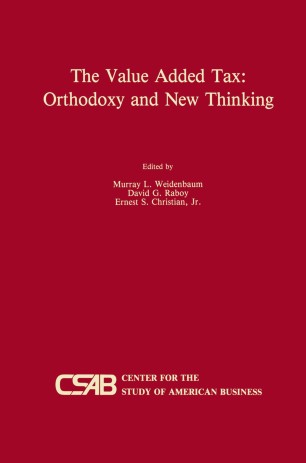 IF, WHEN YOU SAY "CONSUMPTION TAX , " YOU MEAN . . . by Ernest S. Christian, Jr. and Cliff Massa III Much has been said and written about consumption taxes in the United States, but mostly in a theoretical context. Dozens of schol­ arly treatises have been published, along with innumerable papers and speeches most of which were more argumentative than illumi­ nating in nature. Audiences have sat through uncounted confer­ ences on the merits or evils of consumption taxes, depending on the speakers' perspectives. There have been only three comprehensive legislative proposals to which these theories and arguments could be 1 applied, no one of which was acted upon in the Congress. Purveyors of conventional wisdom have suggested that this theo­ retical context might be replaced within a year or two by actual con­ sideration of a federal-level consumption tax. Some see enactment of such a tax as a desirable -- or at least a necessary -- means for reducing the federal deficit. The National Economic Commission, which was created by legislation in 1987 to recommend deficit reduction measures, was perceived by many skeptics and proponents alike to be the Trojan Horse which would carry a consumption tax Lrhe proposals were H. R. 7015, ''The Tax Restructuring Act of 1980," introduced by Rep. Al Ullman; S. 1102, ''The Business Transfer Tax Act of 1985," introduced by Senator William Roth; and H. R. 4598, introduced by Rep.