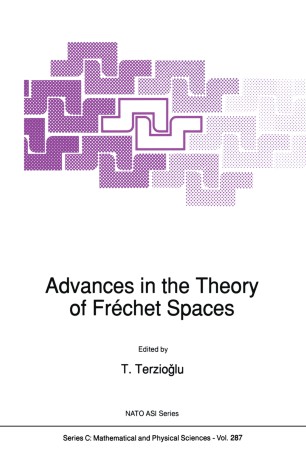 Advances in the Theory of Fréchet Spaces

Frechet spaces have been studied since the days of Banach. These spaces, their inductive limits and their duals played a prominent role in the development of the theory of locally convex spaces. Also they are natural tools in many areas of real and complex analysis. The pioneering work of Grothendieck in the fifties has been one of the important sources of inspiration for research in the theory of Frechet spaces. A structure theory of nuclear Frechet spaces emerged and some important questions posed by Grothendieck were settled in the seventies. In particular, subspaces and quotient spaces of stable nuclear power series spaces were completely characterized. In the last years it has become increasingly clear that the methods used in the structure theory of nuclear Frechet spaces actually provide new insight to linear problems in diverse branches of analysis and lead to solutions of some classical problems. The unifying theme at our Workshop was the recent developments in the theory of the projective limit functor. This is appropriate because of the important role this theory had in the recent research. The main results of the structure theory of nuclear Frechet spaces can be formulated and proved within the framework of this theory. A major area of application of the theory of the projective limit functor is to decide when a linear operator is surjective and, if it is, to determine whether it has a continuous right inverse.