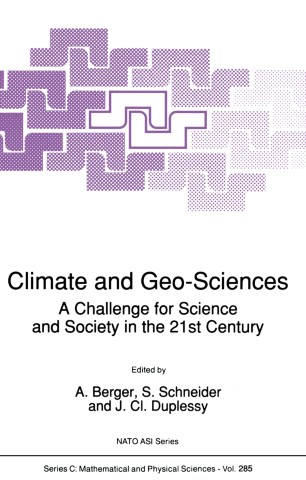 A Challenge for Science and Society in the 21st Century

It has been widely recognized recently that in order to make scientific progress on large and important problems (eg, carbon dioxide effects on climate, viability of various sites for nuclear waste disposal etc.), it is necessary to integrate knowledge from wide ranging sets of disciplines. This is certainly true in the climate sciences, for progress in understanding the cause of the ice ages or the effects of industrial pollution on the future climate or even the likelihood of severe climatic consequences in the aftermath of nuclear war. All require state-of -the -art input from many geoscience disci­ plines climatology, oceanography, meteorology, chemistry, ecology, glaciology, geology, astronomy, space technology, computer technology, mathematics etc. Major international meetings have called for interaction of such geo-science disciplines to solve real world problems. To move beyond the rhetorical level, the NATO Special Programme on Global Transport Mechanisms in the Geo-Sciences whose activities started in 1983, deci­ ded to organise his closing symposium on such a topic which focus on the relationship between climate and geo-sciences. This symposium was held at the end of May 1988 at the Universite Catholique de Louvain, Louvain-Ia-Neuve, Belgium. One hundred-and-thirty participants from the 16 NATO countries and a number of non-NATO countries assembled for the Symposium. Another feature was the attendance by special invitation of 16 pro­ mising young scientists who might well become leading scientists on climate and geo-sciences in their respective countries in the next century.