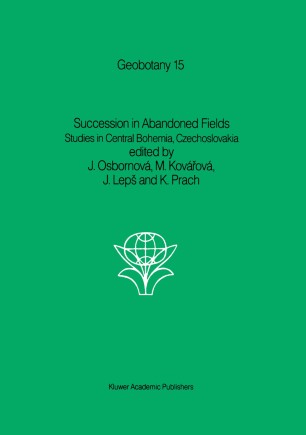 Old and New Fields of Old-Field Ecology In ecology, succession occupies a place similar to that of evolution in general biology. Ram6n Margalef, 1968. It was a great honor for me to have been asked by Marinus Werger to write an introductory note to this very special volume. Presumably my friends and former students in Europe felt that a few words from the New World might put the results presented in this exciting book into a somewhat broader perspective. My perspective (or retrospective), however, is neither impersonal nor original; it is an eclectic reflection of recent developments in ecology and in old-field ecology in particular. The ecological generalizations and theories of Ram6n Margalef and Eugene P. Odum, as we perceived them in Prague in the early 1970s, were for some of us so attractive and promising that we even started to believe it would not take too long until we had a truly unifying general theory of ecological succession. All that was needed - we thought - were data clarifying a few controversial issues. This is how our studies of old-field succession began in 1973. We viewed old-fields as a sort of 'Drosophila' for terrestrial ecology.