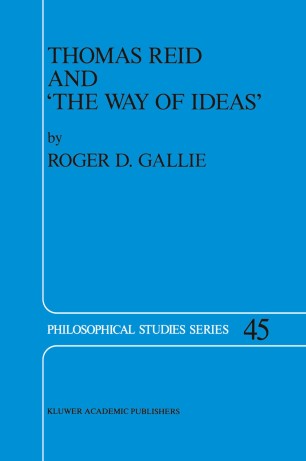 Thomas Reid and ‘The Way of Ideas’

This book is meant to serve as an introduction to the philosophy of Thomas Reid by way of a study of certain themes central to that philosophy as we find it expounded in his extensive and influential published writings. The choice of these themes inevitably reflects philosophical interests of the author of this book to some extent but a main consideration behind their selection is that they are extensively treated by Reid in response to treatments by certain of his predecessors in an identifiable tradition called by Yolton 'The Way ofIdeas'. My interest in Reid's philosophy was first awakened by the brilliant writings of A.N. Prior, and in particular by Part II of his posthumous 'Objects of Thought' called 'What we think about' together with his suggestion that Reid was a precursor of Mill on the signification of proper names. It is my hope that the standard of exegesis and of discussion throughout the book, and especially in the case of these topics, is a not unworthy tribute to that thinker.