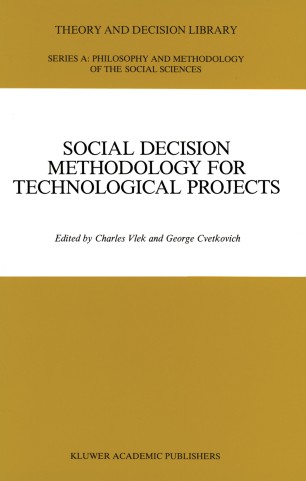 This book grew out of the conviction that the preparation and management of large-scale technological projects can be substantially improved. We have witnessed the often unhappy course of societal and political decision making concerning projects such as hazardous chemical installations, novel types of electric power plant or storage sites for solid wastes. This has led us to believe that probabilistic risk analysis, technical reliability analysis and environm,ental impact analysis are necessary but insufficient for making acceptable, and justifiable, social decisions about such projects. There is more to socio-technical decision making than applying acceptance rules based on neglige ably low accident probabilities or on maximum credible accidents. Consideration must also be given to psychological, social and political issues and methods of decision making. Our conviction initially gave rise to an international experts' workshop titled 'Social decision methodology for technological projects' (SDMTP) and held in May 1986 at the University of Groningen, the Netherlands, at a time when Cvetkovich spent a sabbatical there. The work­ shop - aimed at surveying the issues and listing the methods to address them - was the first part of an effort whose second part was directed at the production of this volume. Plans called for the book to deal systematically with the main problems of socio-technical decision making; it was to list a number of useful approaches and methods; and it was to present a number of integrative conclusions and recommendations for both policy makers and methodologists.