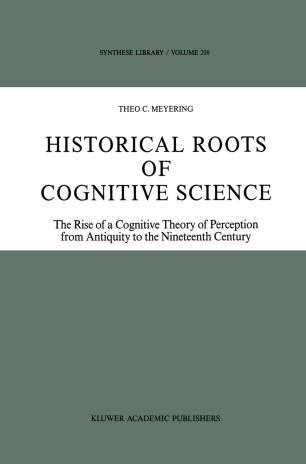 Cognitive science, in Howard Gardner's words, has a relatively short history but a very long past. While its short history has been the subject of quite a few studies published in recent years, the current book focuses instead on its very long past. It explores the emergence of the conceptual framework that was necessary to make the rise of modem cognitive science possible in the first place. Over the long course of the history of the theory of perception and of cognition, various conceptual breakthroughs can be discerned that have contributed significantly to the conception of the mind as a physical symbol system with intricate representational capacities and unimaginably rich computational resources. In historical retrospect such conceptual transitions-seemingly sudden and unannounced-are typically foreshadowed in the course of enduring research programs that serve as slowly developing theoretical con­ straint structures gradually narrowing down the apparent solution space for the scientific problems at hand. Ultimately the fundamental problem is either resolved to the satisfaction of the majority of researchers in the area of investigation, or else-and much more commonly-one or more of the major theoretical constraints is abandoned or radically modified, giving way to entirely new theoretical vistas. In the history of the theory of perception this process can be witnessed at vari­ ous important junctures.