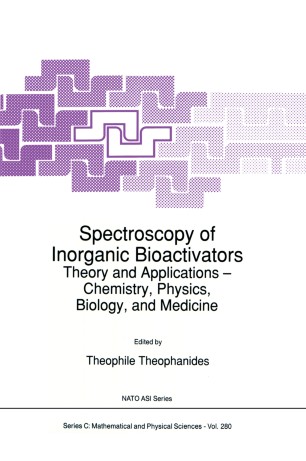 This edition is the labor of many enthousiastic scientists who were invited to teach at a NATO Advanced Study Institute on the "Spectroscopy of Inorganic Bioactivators" which took place on August 20 -30, 1988 at Club Poseidon, Loutraki, Greece. In this book the subjects were taught through several well prepared lectures. These lectures stretch the fact that scientific knowledge is the painfully gathered product of many wonderful human minds. I made an attempt to divide the lectures into separate chapters, however, there is interaction among the lectures, as I hope the book will show. First, there is introductory on an lecture supercomputing and super computers and their applications to solving structures of biological molecules followed by a state-of-the-art x-ray diffraction method at pi co second times. Important new advances have been made in x-ray diffraction analysis at picosecond times, in Hadamard spectroscopy, in micro-Raman spectroscopy in the Near Infrared region (1. 01 ~m) and remote sensing by Fourier Transform Infrared Spectroscopy. The chapters that follow include applications of spectroscopic technique to vii viii biologically important molecules, such as, DNA, proteins, membranes, and metal ion-biological molecule interactions. I would like to express my thanks to all the authors for their contributions and their cooperation in submitting their manuscript. I also thank the NATO Science Committee for making this possible. The field looks very promising for significant and exciting developments in the application of spectroscopy to bioactivators.