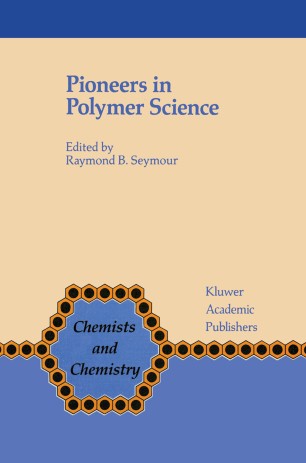 Part of the Chemists and Chemistry book series (CACH, volume 10)

Because of a lack of appreciation for his efforts in developing modern polymer science, the contributions of Hermann Staudinger were disregarded for decades. There have also been delays in recognizing the contributions of other pioneers in polymer science. Hence, it is gratifying to note that Professor Seymour chaired an American Chemical Society Symposium focusing on the contributions of these pioneers and that Kluwer Academic Publishers has published the proceedings of this important symposium. H.Mark v DEDICATION This book on Pioneers in Polymer Science is dedicated to Nobel Laureate Polymer Scientists Hermann Staudinger, Emil Fischer, Herman Mark, Paul J. Flory, Linus Pauling, Carl S. Marvel, M. Polanyi, Giulio Natta, Karl Ziegler, and Bruce Merrifield as well as to those pioneers such as J.C. Patrick, Robert Thomas, William Sparks, Maurice Huggins, Qtto Bayer, Leo Baekeland, Anselm Payer, Roger Boyer, Waldo Semon, Robert Banks, J.P. Hogan, and other pioneers who, to a large degree, were responsible for the development of the world's second largest industry. ACKNOWLEDGEMENT The editor appreciates the contribution of co-authors Herman Mark, C.H. Fisher, and G. Alan Stahl who co­ chaired the Symposium on Pioneers in Polymer Science at the National Meeting of the American Chemical Society at Seattle, WA in 1984 and who contributed a chapter in this book. The editor is particularly grateful to Mischa Thomas who typed this manuscript.

`Written by practitioners immersed in the field of polymer science, the book will be welcomed for both reading and reference.'
Beckman Center News, 1990
Buy options