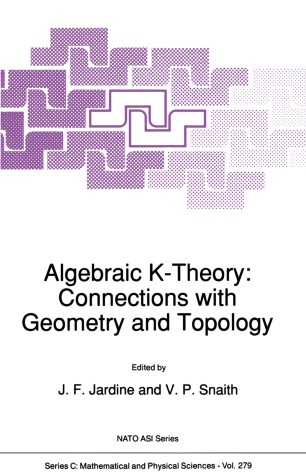 A NATO Advanced Study Institute entitled "Algebraic K-theory: Connections with Geometry and Topology" was held at the Chateau Lake Louise, Lake Louise, Alberta, Canada from December 7 to December 11 of 1987. This meeting was jointly supported by NATO and the Natural Sciences and Engineering Research Council of Canada, and was sponsored in part by the Canadian Mathematical Society. This book is the volume of proceedings for that meeting. Algebraic K-theory is essentially the study of homotopy invariants arising from rings and their associated matrix groups. More importantly perhaps, the subject has become central to the study of the relationship between Topology, Algebraic Geometry and Number Theory. It draws on all of these fields as a subject in its own right, but it serves as well as an effective translator for the application of concepts from one field in another. The papers in this volume are representative of the current state of the subject. They are, for the most part, research papers which are primarily of interest to researchers in the field and to those aspiring to be such. There is a section on problems in this volume which should be of particular interest to students; it contains a discussion of the problems from Gersten's well-known list of 1973, as well as a short list of new problems.