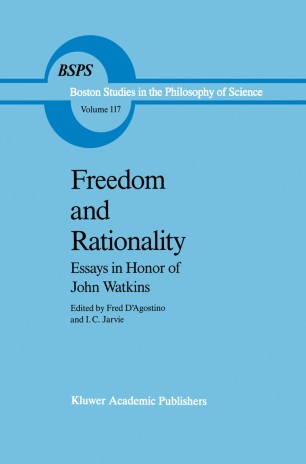 Essays in Honor of John Watkins From his Colleagues and Friends

Part of the Boston Studies in the Philosophy of Science book series (BSPS, volume 117)

x philosophy when he inaugurated a debate about the principle of methodologi­ cal individualism, a debate which continues to this day, and which has inspired a literature as great as any in contemporary philosophy. Few collections of material in the general area of philosophy of social science would be considered complete unless they contained at least one of Watkins's many contributions to the discussion of this issue. In 1957 Watkins published the flrst of a series of three papers (1957b, 1958d and 196Oa) in which he tried to codify and rehabilitate metaphysics within the Popperian philosophy, placing it somewhere between the analytic and the empirical. He thus signalled the emergence of an important implica­ tion of Popper's thought that had not to that point been stressed by Sir Karl himself, and which marked off his followers from the antimetaphysical ideas of the regnant logical positivists. In 1965 years of work in political philosophy and in the history of philosophy in the seventeenth century were brought to fruition in Watkins's widely cited and admired Hobbes's System of Ideas (1965a, second edition 1973d). This book is an important contribution not just to our understanding of Hobbes's political thinking, but, perhaps more importantly, to our understanding of the way in which a system of ideas is constituted and applied. Watkins built on earlier work in developing an account of Hobbes's ideas in which was revealed and clarifled the unity of Hobbes's metaphysical, epistemological and political ideas.