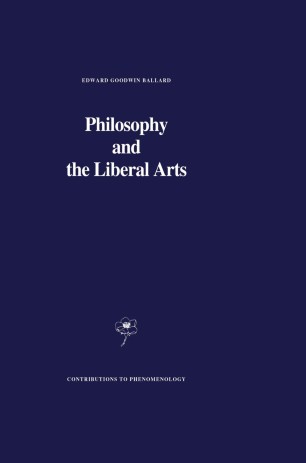 Philosophy and the Liberal Arts

Part of the Contributions To Phenomenology book series (CTPH, volume 2)

As this collection of essays demonstrates, over a long career Edward Goodwin Ballard has written on a wide range of topics of philosophical interest. Although the present volume can be enjoy­ ably browsed, it is not simply a sampling of his writings. Rather, herein Professor Ballard has chosen and organized essays which pertain to the major concerns of his philosophic life. He has long held that the function of philosophy, particularly in a time such as ours, is the discernment and analysis of basic principles (archai) and their consequences. Indeed, in Philosophy at the Crossroads. he recommended focusing upon the history of philosophy understood as the movement of recognizing and interpreting the shifts in first principles as they reflect and determine human change. For Ballard, the study of the history of philosophy, like philosophy itself, is not so much a body of knowledge as an exercise (an art) whiQh moves the practitioner towards social and individual maturity. He holds, along with Plato and Husserl, that philosophy is a process of conversion to the love of wisdom as well as a grasp of the means for its attainment. Throughout his writings, Ballard has maintained that the difficulties of this journey have to do with the limitations of the pilgrim. Human being is perspectival, finite, and inevitably ignorant. Philosophic command and self -recognition reside in the just assessment of the limits of human knowledge.