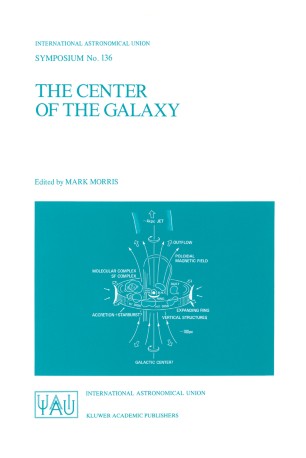 The Center of the Galaxy

Proceedings of the 136th Symposium of the International Astronomical Union, Held in Los Angeles, U.S.A., July 25–29, 1988

The investigation of the Galactic nucleus and its surroundings is necessarily a modem endeavor, for traditional observations made at visual wavelengths have not even begun to penetrate the veil of -30 magnitudes of visual extinction that intercedes. On the other hand, infrared, and especially radio observers find a relatively unobstructed view of the central portion of the Galaxy, so the study of this arena has proceeded apace with the development of these branches of astronomy. Thus, it is no accident that the first IAU­ sponsored conference to be held on the Galactic center is timed to coincide with the initiation, or the immediate aftennath, of major technical developments at long wavelengths, including infrared array detectors, millimeter-wavelength aperture synthesis, and self-calibration and refmed deconvolution algorithms in aperture synthesis radio astronomy. The center of the Galaxy is also accessible to X and gamma-ray observers, and progress at high energies has been steady, especially as imaging capabilities are being realized at X-ray wavelengths. However, one might expect that the revolution in the high­ energy domain is still ahead of us, as instruments with larger collecting areas and improved spatial resolution are now being developed. The youth of this subject is evidenced by the relatively small number of meetings that have been devoted to it.