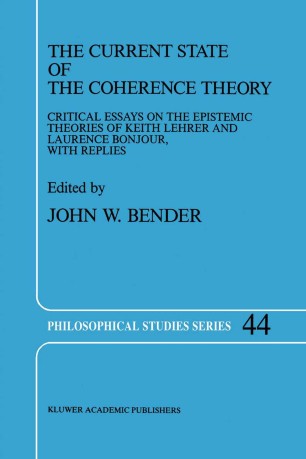 The Current State of the Coherence Theory

Critical Essays on the Epistemic Theories of Keith Lehrer and Laurence BonJour, with Replies

The subtitle of this book should be read as a qualification as much as an elaboration of the title. If the goal were completeness, then this book would have included essays on the work of other philosophers such as Wilfrid Sellars, Nicholas Rescher, Donald Davidson, Gilbert Harman and Michael Williams. Although it would be incorrect to say that each of these writers has set forth a version of the coherence theory of justification and knowledge, it is clear that their work is directly relevant, and reaction to it could easily fill a companion volume. This book concentrates, however, on the theories of Keith Lehrer and Laurence BonJour, and I doubt that any epistemologist would deny that they are presently the two leading proponents of coherentism. A sure indication of this was the ease with which the papers in this volume were solicited and delivered. The many authors represented here were willing, prepared, and excited to join in the discussion of BonJour's and Lehrer's recent writings. I thank each one personally for agreeing so freely to contribute. All of the essays but two are published for the first time here. Marshall Swain's and Alvin Goldman's papers were originally presented at a symposium on BonJour's The Structure of Empirical Knowledge at the annual meeting of the Central Division of the American Philosophical Association, Chicago, Illinois, in April, 1987.