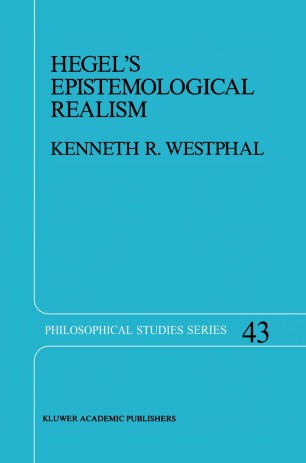 The scope of this study is both ambitious and modest. One of its ambitions is to reintegrate Hegel's theory of knowledge into main stream epist~ology. Hegel's views were formed in consideration of Classical Skepticism and Modern epistemology, and he frequently presupposes great familiarity with other views and the difficulties they face. Setting Hegel's discussion in the context of both traditional and contemporary epistemology is therefore necessary for correctly interpreting his issues, arguments, and views. Accordingly, this is an issues-oriented study. I analyze Hegel's problematic and method by placing them in the context of Sextus Empiricus, Descartes, Kant, Carnap, and William Alston. I discuss Carnap, rather than a Modern empiricist such as Locke or Hume, for several reasons. One is that Hegel himself refutes a fundamental presupposition of Modern empiricism, the doctrine of "knowledge by acquaintance," in the first chapter of the Phenomenology, a chapter that cannot be reconstructed within the bounds of this study.