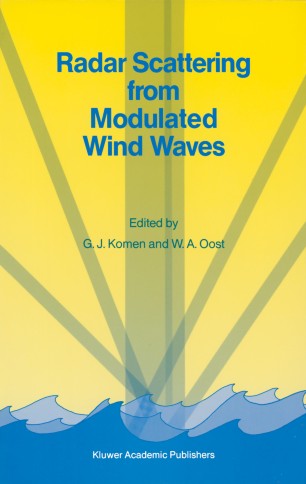 Proceedings of the Workshop on Modulation of Short Wind Waves in the Gravity-Capillary Range by Non-Uniform Currents, held in Bergen aan Zee, The Netherlands, 24–26 May 1988

Ten years ago, de Loor and co-workers at TNO, The Netherlands, were the first to report bottom topography patterns in real aperture radar (RAR) images of the southern North Sea. At that time, this was a real puzzle. The skin depth of microwaves for sea water is only of the order of centimeters while the sea bottom is about 20 meters below the surface. Electromagnetic radiation therefore cannot probe the bottom directly. Similar phenomena were found in radar imagery from SEASAT and SIR-AlB synthetic aperture radars (SAR's) of Nantucket Shoals, the English Channel and many other coastal areas. Since then theory and ocean field experiments (Le., Phelps Bank, Georgia Straits, SARSEX, TOWARD, FASINEX, etc.) have advanced our understanding considerably. We now know that these surface signatures are the results of surface currents, perturbed by the bottom topography, which refract the propagation and modulate the energy of (short) surface waves so as to cause microwave backscatter power variations. Hence, any large scale ocean features containing nonuniform surface currents (i.e. internal waves, eddies, fronts, etc.) will cause similar manifestations in the radar imagery by means of current-wave-microwave interactions. Observations confirm this.