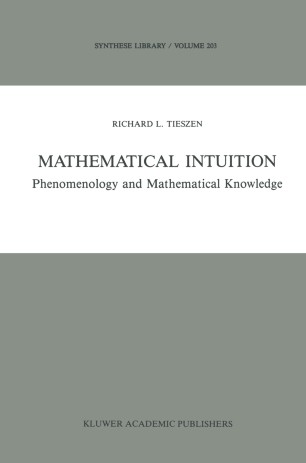 "Intuition" has perhaps been the least understood and the most abused term in philosophy. It is often the term used when one has no plausible explanation for the source of a given belief or opinion. According to some sceptics, it is understood only in terms of what it is not, and it is not any of the better understood means for acquiring knowledge. In mathematics the term has also unfortunately been used in this way. Thus, intuition is sometimes portrayed as if it were the Third Eye, something only mathematical "mystics", like Ramanujan, possess. In mathematics the notion has also been used in a host of other senses: by "intuitive" one might mean informal, or non-rigourous, or visual, or holistic, or incomplete, or perhaps even convincing in spite of lack of proof. My aim in this book is to sweep all of this aside, to argue that there is a perfectly coherent, philosophically respectable notion of mathematical intuition according to which intuition is a condition necessary for mathemati­ cal knowledge. I shall argue that mathematical intuition is not any special or mysterious kind of faculty, and that it is possible to make progress in the philosophical analysis of this notion. This kind of undertaking has a precedent in the philosophy of Kant. While I shall be mostly developing ideas about intuition due to Edmund Husser! there will be a kind of Kantian argument underlying the entire book.

`This book is a very welcome addition to the small number of texts which succeed in bridging the gap between the phenomenological tradition in philosophy of mathematics and the analytic tradition. The author shows very convincingly that the phenomenological tradition is a rich source of subtle and fertile ideas which are highly relevant to central problems in contemporary philosophy of mathematics.'
Mathematical Reviews
Buy options