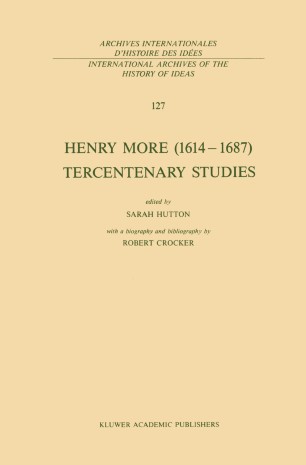 with a biography and bibliography by Robert Crocker

Of all the Cambridge Platonists, Henry More has attracted the most scholar­ ly interest in recent years, as the nature and significance of his contribution to the history of thought has come to be better understood. This revival of interest is in marked contrast to the neglect of More's writings lamented even by his first biographer, Richard Ward, a regret echoed two centuries after his 1 death. Since then such attention as there has been to More has not always served him well. He has been dismissed as credulous on account of his belief in witchcraft while his reputation as the most mystical of the Cambridge 2 school has undermined his reputation as a philosopher. Much of the interest in More in the present century has tended to focus on one particular aspect of his writing. There has been considerable interest in his poems. And he has come to the attention of philosophers thanks to his having corresponded with Descartes. Latterly, however, interest in More has been rekindled by renewed interest in the intellectual history of the seventeenth century and Renaissance. And More has been studied in the context of seventeenth-cen­ tury science and the wider context of seventeenth-century philosophy. Since More is a figure who belongs to the Renaissance tradition of unified sapientia he is not easily compartmentalised in the categories of modern disciplines. Inevitably discussion of anyone aspect of his thought involves other aspects.