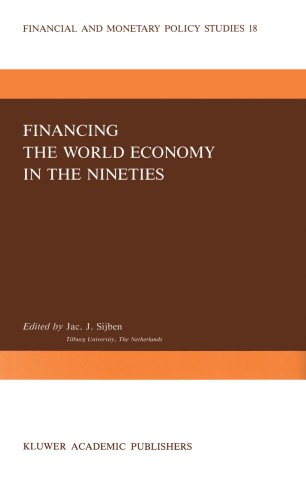 Financing the World Economy in the Nineties

The present volume contains the texts of the papers and criti­ cal commentary presented at the one-day conference "Financing the world economy in the nineties" at Tilburg University (23 March 1988). This conference was organized by the Post-graduate School of Banking and Finance of "The Tilburg Institute of Advanced Studies" (T .I.A.S.) which is closely associated to Tilburg University. It should be borne in mind that all the chapters were written before March 1988. Although some were revised later, none of the authors has been asked to include develop­ ments which have occurred since. To achieve a better understanding of the current financial imbalances in the world economy and its consequences and to discuss the alternatives to correct these imbalances, this conference brought to­ gether outstanding authorities from the academic world, from the inter­ national supervisors, and from the industrial companies and the banks. After the editor's introduction about the external disequilib­ ria in the world economy and the burden of economic adjustment, Chapter 1 is the text of the opening address by Dr. Witteveen. He calls atten­ tion to the central issue, which financing needs that we can see now may persist into the nineties and how can they be met? In this context he mentions the U.S.-current account deficit, the need for stable exchange rates and the international debt problem.