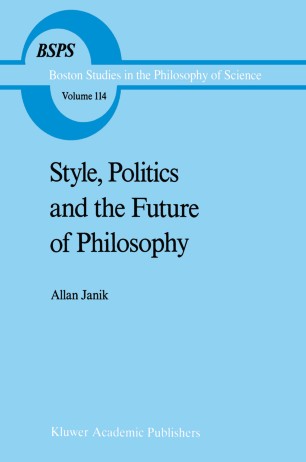 Style, Politics and the Future of Philosophy

Part of the Boston Studies in the Philosophy of Science book series (BSPS, volume 114)

Why did the two most influential philosophers in the twentieth century, Ludwig Wittgenstein and Martin Heidegger, write in such a curious fashion that they confused a whole generation of disciples and created a cottage industry for a second generation in the interpretation of their works? Do those curious writing strategies have a philosophical signif­ icance? How does philosophical style reflect attitudes to society and politics or bear significance for the social sciences? Is politics one type of human activity among many other independent ones as the classical modem political theorists from Hobbes and Machiavelli onwards have thought, or is it part and parcel of all of the activities into which an animal that speaks enters? How could the latter be elucidated? If politics arises from legitimate disputes about meanings, what does this imply for current cultural debates? for the so-called social sciences? above all, for that cultural conversation which some consider to be the destiny of philosophy in the wake of the demise of foundationalism? These are a few of the most important questions which led me to the critical confrontation and reflections in the essays collected below.