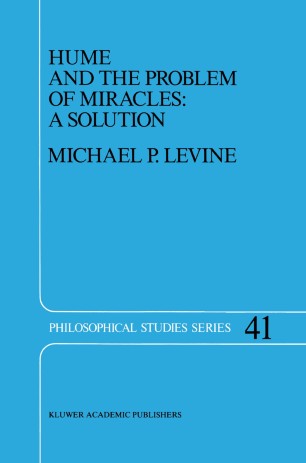 Hume and the Problem of Miracles: A Solution

This book developed from sections of my doctoral dissertation, "The Possibility of Religious Knowledge: Causation, Coherentism and Foundationalism," Brown University, 1982. However, it actually had its beginnings much earlier when, as an undergraduate at the University of Virginia, I first read Hume's "Of Miracles" and became interested in it. (Fascinated would be too strong. ) My teacher put the following marginal comment in a paper I wrote about it: "Suppose someone told you that they had been impregnated by an angel whispering into their ear. Wouldn't you think they had gone dotty?" She had spent time in England. I thought about it. I agreed that I would not have believed such testimony, but did not think this had much to do with Hume's argument against belief in miracles. What surprised me even more was the secondary literature. I became convinced that Hume's argument was misunderstood. My main thesis is established in Part I. This explains Hume's argument against justified belief in miracles and shows how it follows from, and is intrinsically connected with, his more general metaphysics. Part II Part I. It should give the reader a more complete understanding builds on of both the structure of Hume's argument and of his crucial and questionable premises. Chapters 5 and 11 are perhaps the most technical in the book, but they are also the least necessary. They can be skipped by the reader who is only interested in Hume on miracles.