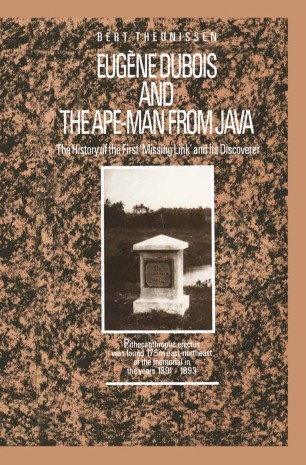 Eugène Dubois and the Ape-Man from Java

The History of the First ‘Missing Link’ and Its Discoverer

Although the name Pithecanthropus is now seldom used, there are few who study the origin of our species who will fail to recognise the historical place of the usage and its association with Eugene Dubois. During the last thirty or forty years, Australopithecus and its African context has tended to draw attention from the early work on our origins in Java. It is now increasingly common to hear the term 'pithecanthropine' used only to indicate the Asian or Far Eastern examples of Homo erectus which, although probably derived from African ancestry, have some features that in the opinion of some experts may justify their being considered distinctive. This discussion is not within the pages that follow which deal extensively with the work of Eugene Dubois. He was an extraordinary man who did as much as any person since to put the great antiquity of our ancestors firmly in the public domain. Dubois became involved with the study of human origins from a medical and anatomical background as have many since. The jealousies and professional pressures that we think of as a phenomenon of the post-war years were clearly a major factor in deciding the future of his career.

`Eugène Dubois and the Ape-Man from Java does not tell us everything we might want to know about its subjects, but it does place them in clear historical perspective and correct misinformation about them that has been around for a long time. Its contribution to the historiography of anthropology is overdue.'
Paul A. Erickson.

`I found this book an interesting and fascinating study of one of the earliest personalities in human evolution studies ... I would strongly recommend it to anyone interested in human evolution.'
B. Theunissen.
Buy options