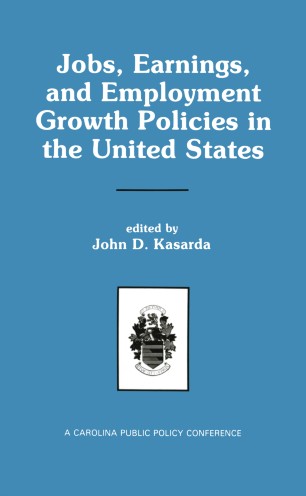 Jobs, Earnings, and Employment Growth Policies in the United States

John D. Kasarda By all accounts, the United States has led the world in job creation. During the past 20 years, its economy added nearly 40 million jobs while the combined European Economic Community added none. Since 1983 alone, the U. S. gener­ ated more than 15 million jobs and its unemployment rate dropped from 7. 5 percent to approximately 5 percent while the unemployment rate in much of western Europe climbed to double digits. Even Japan's job creation record pales in comparison to the United States'. with its annual employment growth rate less than half that of the United States over the past 15 years (0. 8 percent vs. 2 percent. ) Yet, as the U. S. economy has been churning out millions of jobs annually, con­ flicting views and heated debates have emerged regarding the quality of these new jobs and its implications for standards of living and U. S. economic competi­ tiveness. Many argue that the "great American job machine" is a "mirage" or "grand illusion. " Rather than adding productive, secure, well-paying jobs, most new employment, critics contend, consists of poverty level, dead-end, service­ sector jobs that contribute little or nothing to the nation's productivity and inter­ national competitiveness. Much of the blame is placed on Reagan-Bush policies that critics say undermine labor unions, encourage wasteful corporate restructur­ ing, foster exploitative labor practices, and reduce fiscal support for education and needed social services.