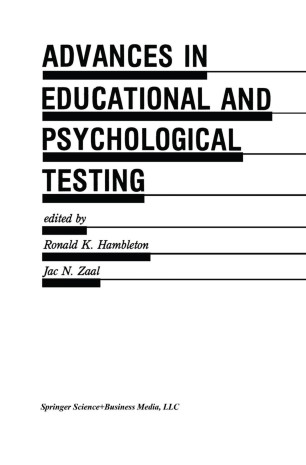 Advances in Educational and Psychological Testing: Theory and Applications

Over the last 20 years there have been a large number of technical advances and changes in the field of educational and psychological testing. According to Anne Anastasi, The decade of the 1980's has been a period of unusual advances in ,psychological testing. Technological progress, theoretical sophistication, and increasing pro­ fessional responsibility are all evident in the fast-moving events in this field (A. Anastasi, Psychological Testing, Sixth Edition. New York: Macmillan, 1988). On the psychometric front, advances in topics such as item response theory, criterion-referenced measurement, generalizability theory,· analy­ sis of covariance structures, and validity generalization are reshaping the ways that ability and achievement tests are constructed and evaluated, and that test scores are interpreted. But \Jsychometric advances, as substantial and important as they have been, are only a fraction of the major changes in the field of testing. Today, for example, the computer is radically chang­ ing the ways in which tests are constructed, administered, and scored. Computers are being used to administer tests "adaptively." That is, the sequence of questions an examinee is administered depends upon his or her performance on earlier administered items in the test. Tests are "adapted" to the ability levels of the examinees who are being assessed. One result is shorter tests with little or no loss in measurement precision. Computers are also being used to store or bank test items. Later, items of interest can be selected, and the computer is used to print copies of the test.