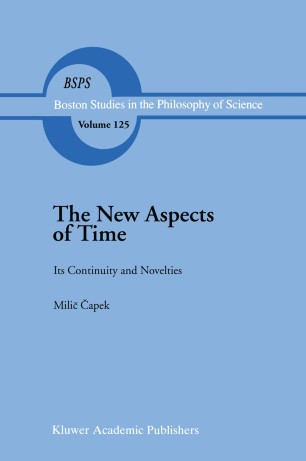 The New Aspects of Time

Its Continuity and Novelties

Part of the Boston Studies in the Philosophy of Science book series (BSPS, volume 125)

At last his students and colleagues, his friends and his friendly critics, his fellow-scientist and fellow-philosophers, have the works of Milic Capek before them in one volume, aside from his books of course. Now the development of his interests and his thoughts, always led centrally by his concern to understand 'the philosophical impact of contemporary physics', becomes clear. In the nearly 90 essays and papers, and in his book on the philosophical impact as well as his classical restatement of process philosophy in his Bergson and Modern Physics, Professor Capek establishes one of the fundamental alternatives to the comprehension of human experience, and thereby of the world. Capek is certainly to be seen with respect and admiration, for he has dealt with the deepest and toughest of scientific as well as metaphysical problems: his major efforts in the philosophy of mind focussed upon the time of experience, and in the philosophy of physics focussed upon continuity, causality and again the temporal, now in the world-picture.