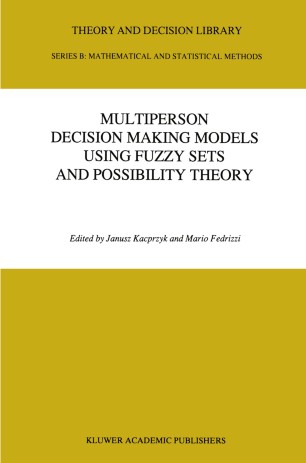 Decision making is certainly a very crucial component of many human activities. It is, therefore, not surprising that models of decisions play a very important role not only in decision theory but also in areas such as operations Research, Management science, social Psychology etc . . The basic model of a decision in classical normative decision theory has very little in common with real decision making: It portrays a decision as a clear-cut act of choice, performed by one individual decision maker and in which states of nature, possible actions, results and preferences are well and crisply defined. The only compo­ nent in which uncertainty is permitted is the occurence of the different states of nature, for which probabilistic descriptions are allowed. These probabilities are generally assumed to be known numerically, i. e. as single probabili­ ties or as probability distribution functions. Extensions of this basic model can primarily be conceived in three directions: 1. Rather than a single decision maker there are several decision makers involved. This has lead to the areas of game theory, team theory and group decision theory. 2. The preference or utility function is not single valued but rather vector valued. This extension is considered in multiattribute utility theory and in multicritieria analysis. 3.