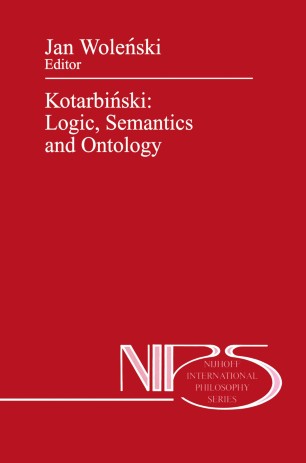 Tadeusz Kotarbinski is one of towering figures in contemporary Polish philosophy. He was a great thinker, a great teacher, a great organizer of philosophical and scientific life (he was, among others, the rector of the Uni versi ty of t6dz, the president of the Polish Academy of Sciences, and the president of the International Institute of Philosophy), and, last but not least, a great moral authority. He died at the age of 96 on October 3, 1981. Kotarbinski was active in almost all branches of philosophy. He made many significant contributions to logic, semantics, ontology, epistemology, history of philosophy, and ethics. He created a new field, namely praxiology. Thus, using an ancient distinction, he contributed to theoretical as well as practical philoso~hy. Kotarbinski regarded praxiology as his major philosophical "child". Doubtless, praxiology belongs to practical philosophy. This collection, howewer, is mainly devoted to Kotarbinski' s theoretical philosophy. Reism - Kotarbinski' s fundamental idea of ontology and semantics - is the central topic of most papers included here; even Pszczolowski' s essay on praxiology considers its ontological basis. ,Only two papers, namely that of Zarnecka-Bialy and that of Wolenski, are not linked with reism. However, both fall under the general label "Kotarbinski: logic, semantics and ontology". The collection partly consists of earlier published papers.