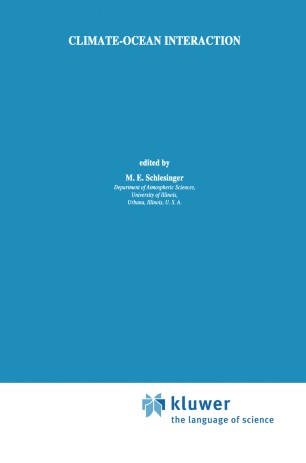 Preface This book is the culmination of a workshop jointly organized by NATO and CEC on Climate-Ocean Interaction which was held at Lady Margaret Hall, Oxford University during 26-30 September 1988. The objective of the ARW was to assess the current status of research on climate-ocean interaction, with a major focus on the development of coupled atmosphere-ocean-ice models and their application in the study of past, present and possible future climates. This book contains 16 chapters divided into four parts: Introduction; Observations of the Climate of the Ocean; Modelling the Atmospheric, Oceanic and Sea Ice Components of the Climatic System; and Simulating the Variability of Climate on Short, Medium and Long Time Scales. A fifth part contains the reports of the five Working Groups on: Climate Observations, Modelling, ENSO Modelling and Prediction, Climate-Ocean Interaction on TIme Scales of Decades to Centuries, and Impact of Paleoclimatic Proxy Data on Climate Modelling. Preface ix Acknowledgements I thank Howard Cattle and Neil Wells for their guidance and assistance as members of the Workshop Organizing Committee. I particularly thank Michael Davey for all his efforts as Local Organizer to make the ARW a success. I also thank the staff of Lady Margaret Hall, Oxford University, for their help with the arrangements for the ARW.