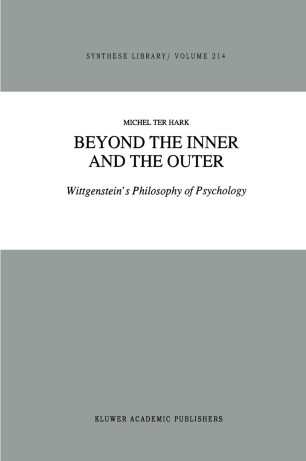 Beyond the Inner and the Outer

Wittgenstein's aphoristic style holds great charm, but also a great danger: the reader is apt to glean too much from a single fragment and too little from the fragments as a whole. In my first confron­ tations with the Philosophical Investigations I was such a reader, and so, it turned out, were most of the writers on Wittgenstein's later philosophy. Wittgenstein's remarkable ability to bring together many facets of his thought in one fragment is fully exploited in the critical literature; but hardly any attention is paid to the connection with other fragments, let alone to the many hitherto unpublished manuscripts of which the Philosophical Investigations is the final product. The result of this fragmentary and ahistorical approach to Wittgenstein's later work is a host of contradictory interpretations. What Wittgenstein really wanted to say remains insufficiently clear. Opinions are also strongly divided about the value of his work. Some authors have been encouraged by his aphorisms and rhetorical questions to dismiss the whole Cartesian tradition or to halt new movements in linguistics or psychology; others, exasperated, reject his philo­ sophy as anti-scientific conceptual conservatism. After consulting unpublished notebooks and manuscripts which Wittgenstein wrote between 1929 and 1951, I became a very different reader. Wittgenstein turned out to be a kind of Leonardo da Vinci, who pursued a form from which every sign of chisel­ ling, every attempt at improvement, had been effaced.