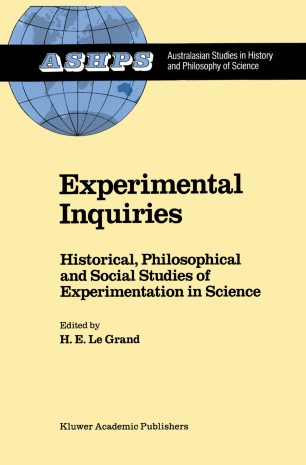 Historical, Philosophical and Social Studies of Experimentation in Science

Part of the Australasian Studies in History and Philosophy of Science book series (AUST, volume 8)

The institutionalization of History and Philosophy of Science as a distinct field of scholarly endeavour began comparatively early -- though not always under that name -- in the Australasian region. An initial lecturing appointment was made at the University of Melbourne imme­ diately after the Second World War, in 1946, and other appointments followed as the subject underwent an expansion during the 1950s and 1960s similar to that which took place in other parts of the world. Today there are major Departments at the University of Melbourne, the University of New South Wales and the University of Wollongong, and smaller groups active in many other parts of Australia and in New Zealand. 'Australasian Studies in History and Philosophy of Science' aims to provide a distinctive publication outlet for Australian and New Zealand scholars working in the general area of history, philosophy and social studies of science. Each volume comprises a group of essays on a connected theme, edited by an Australian or a New Zealander with special expertise in that particular area. Papers address general issues, however, rather than local ones; parochial topics are avoided. Further­ more, though in each volume a majority of the contributors is from Australia or New Zealand, contributions from elsewhere are by no means ruled out. Quite the reverse, in fact -- they are actively encour­ aged wherever appropriate to the balance of the volume in question.