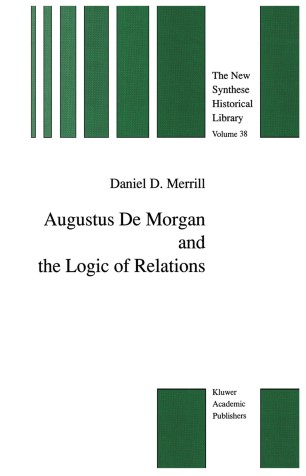 Augustus De Morgan and the Logic of Relations

The middle years of the nineteenth century saw two crucial develop­ ments in the history of modern logic: George Boole's algebraic treat­ ment of logic and Augustus De Morgan's formulation of the logic of relations. The former episode has been studied extensively; the latter, hardly at all. This is a pity, for the most central feature of modern logic may well be its ability to handle relational inferences. De Morgan was the first person to work out an extensive logic of relations, and the purpose of this book is to study this attempt in detail. Augustus De Morgan (1806-1871) was a British mathematician and logician who was Professor of Mathematics at the University of London (now, University College) from 1828 to 1866. A prolific but not highly original mathematician, De Morgan devoted much of his energies to the rather different field of logic. In his Formal Logic (1847) and a series of papers "On the Syllogism" (1846-1862), he attempted with great ingenuity to reformulate and extend the tradi­ tional syllogism and to systematize modes of reasoning that lie outside its boundaries. Chief among these is the logic of relations. De Mor­ gan's interest in relations culminated in his important memoir, "On the Syllogism: IV and on the Logic of Relations," read in 1860.