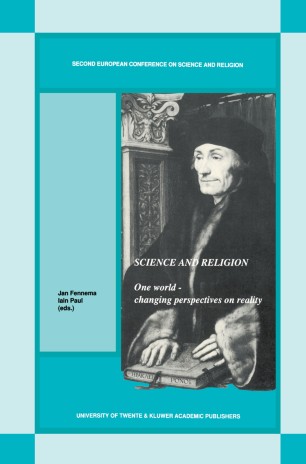 one world — changing perspectives on reality

The world is increasingly becoming . one. It is, at the same time, one endangered ecosystem and one thriving market place with material and spiritual goods on competitive display. And the good and evil things of life cannot easily be sorted out. The world is becoming one also in the sense that it is better understood today than it was in earlier times, that the material good and the spiritual good, though seemingly belonging to different realms of fact defined by their respective modes of existence, together constitute effectively one and the same reality: the modem world of science, technology, computerized administration and power, that calls upon humankind to struggle for a 'just, participatory and sustainable society' * , and to strive for a society of the future that will be the world over both long-lived and worth living. The Second European Conference on Science and Religion, held on 10-13th. March, 1988, on the campus of the Universiteit Twente, Enschede, The Netherlands, was meant to be a modest market place, a forum, where standpoints and opinions could be presented and criticized. It was meant to offer an opportunity to meet and to make acquaintances in the expectation that the exchange of thoughts would lead to new conceptual horizons that would challenge what so far had been considered as hard fact or what until now had been looked upon as a distinctive feature of a well-established view either of the kingdom of the sciences or of the realm of religion.