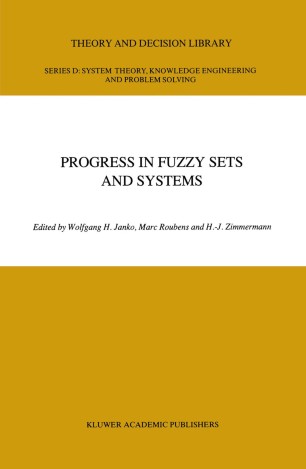 Progress in Fuzzy Sets and Systems

This volume contains the proceedings of the Second Joint IFSA-EC and EURO-WGFS Workshop on Progress in Fuzzy Sets in Europe held on April 6 -8, 1989 in Vienna, Austria. The workshop was organized by Prof. Dr. Wolfgang H. Janko from the University of Economics in Vienna under the auspices of IFSA-EC, the European chapter of the International Fuzzy Systems Association, and EURO-WGFS, the working group on Fuzzy Sets of the Association of Eu­ ropean Operational Research Societies. The workshop gathered more than 30 participants coming from Western European countries (Austria, Bel­ gium, England, Germany, Finland, France, Hungary, Italy, Scotland and Spain) Eastern European countries (Bulgaria, the German Federal Repu­ blic, Hungary and Poland) and non-European countries such as China and Japan. The 15 selected and refereed papers included in the volume are in prin­ ciple the author's own versions, with limited editorial changes and small corrections. They are arranged in alphabetical order. I wish to thank all the contributors for their valuable papers and an outstan­ ding cooperation in the editorial project. I also would like to express my sincere thanks to Professor Dr. H. J. Zimmermann for the cooperation in the refereeing procedure.