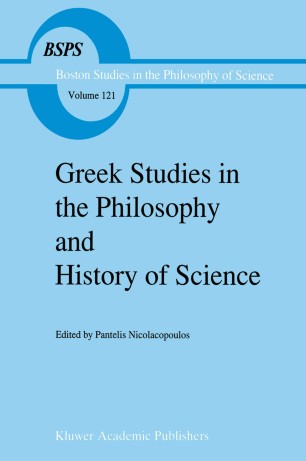 Greek Studies in the Philosophy and History of Science

Part of the Boston Studies in the Philosophy of Science book series (BSPS, volume 121)

Our Greek colleagues, in Greece and abroad, must know (indeed they do know) how pleasant it is to recognize the renaissance of the philosophy of science among them with this fine collection. Classical and modern, technical and humane, historical and logical, admirably original and respectfully traditional, these essays will deserve close study by philosophical readers throughout the world. Classical scholars and historians of science likewise will be stimulated, and the historians of ancient as well as modern philosophers too. Reviewers might note one or more of the contributions as of special interest, or as subject to critical wrestling (that ancient tribute); we will simply congratulate Pantelis Nicolacopoulos for assembling the essays and presenting the book, and we thank the contributors for their works and for their happy agreement to let their writings appear in this book. R. S. C. xi INTRODUCTORY REMARKS Neither philosophy nor science is new to Greece, but philosophy of science is. There are broader (socio-historical) and more specific (academic) reasons that explain, to a satisfactory degree, both the under-development of philosophy and history of science in Greece until recently and its recent development to international standards. It is, perhaps, not easy to have in mind the fact that the modem Greek State is only 160 years old (during quite a period of which it was consider­ ably smaller than it is today, its present territory having been settled after World War II).