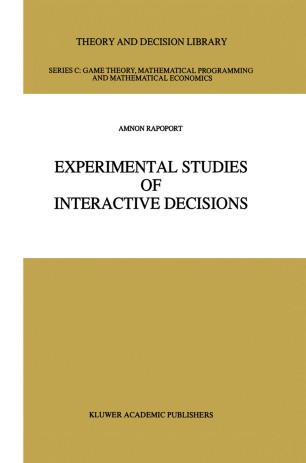 This book is about the interplay of theory and experimentation on group decision making in economics. The theories that the book subjects to experimental testing mostly come from the theory of games. The decisions investigated in the book mostly concern economic interaction like strict competition. two-person bargaining. and coalition formation. The underlying philosophy of the articles collected in this book is consistent with the opinion of a growing number of economists and psychologists that economic issues cannot be understood fully just by thinking about them. Rather. the interplay between theory and experimentation is critical for the development of economics as an observational science (Smith. 1989). Reports of laboratory experiments in decision making and economics date back more than thirty years (e.g .• Allais. 1953; Davidson. Suppes. and Siegel. 1957; Flood. 1958; Friedman. 1%3; Kalisch. Milnor. Nash. and Nering. 1954; Lieberman. 1%0; Mosteller and Nogee. 1951; Rapoport. Chammah. Dwyer. and Gyr. I %2; Siegel and Fouraker. I %0; Stone. 1958). However. only in the last ten or fifteen years has laboratory experimentation in economics started its steady transformation from an occasional curiosity into a regular means for investigating various economic phenomena and examining the role of economic institutions. Groups of researchers in the USA and abroad have used experimental methods with increasing sophistication to attack economic problems that arise in individual decision making under risk. two-person bargaining.