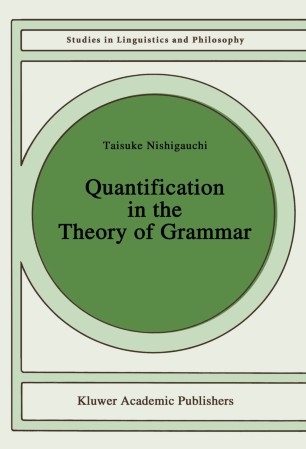 Quantification in the Theory of Grammar

Part of the Studies in Linguistics and Philosophy book series (SLAP, volume 37)

In the past few decades, the development of theoretical linguistics has proved to be successful in shedding light on the intricate nature of language and knowledge of grammar, which contributes to a deeper understanding of the human mind. This book discusses various issues in syntax and logical structure of natural language from theoretical perspectives. The primary data on which theoretical claims are made is drawn from Japanese and Japanese-type languages, but it also contains discussion of related phenomena in English which have never been discussed from the same viewpoint in the current literature. Although the book is written in the format of a version of the Extended Standard Theory tradition, informally referred to as the Principles and Parameters Approach or 'Government and Binding (OB) Theory', it should be of interest to a much wider audience. The reader interested in other theoretical frameworks will find the discussion in this book easily translatable in the framework of his or her choice - in fact, I would like to claim that the problems posed by this book are inevitable in any theory of syntax and semantics of natural language.