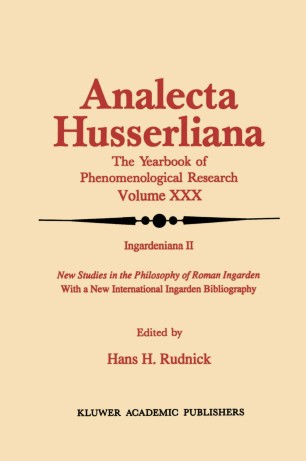 This Ingardenia volume is the second in the Analecta Husserliana series that is entirely devoted to the phenomenology of Roman Ingarden. The first was volume IV (1976). Twenty years after Ingarden's death, this volume demonstrates that the Polish phenomenologist's contribution to philosophy and literary scholarship has received world-wide attention. His ideas have proven especially fruitful for the definition of the structure of the literary work of art and the subsequent recognition of its characteristic features. Of all the early phenomenologists who were students of Husserl, it is Ingarden whose work has faithfully pursued the original tenet that language "holds" the essence of the life-world "in readiness" (bereit halten). To investigate this premise with the rigor of a science, as Husserl had envisioned for phenomenology, was Ingarden's life work. That Ingarden did not quite reach his ambitious goal does not diminish his unquestionable achievement. The understanding of the nature of the literary work of art has increased enormously because of his analyses and aesthetics. The Polish phenomenologist investigated above all the work of art as a structure of necessary components which define and determine its nature. That the artistic ingredient was shortchanged under those conditions should not be surprising, particu­ larly since Ingarden usually kept a purist's philosophical distance from the concrete detail of the material under consideration. He was not concerned with individual works of art but with the principle that was shared by all of them as the defining feature of their being.