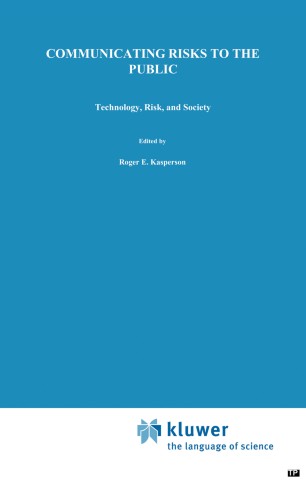 Communicating Risks to the Public

Risk communication: the evolution of attempts Risk communication is at once a very new and a very old field of interest. Risk analysis, as Krimsky and Plough (1988:2) point out, dates back at least to the Babylonians in 3200 BC. Cultures have traditionally utilized a host of mecha­ nisms for anticipating, responding to, and communicating about hazards - as in food avoidance, taboos, stigma of persons and places, myths, migration, etc. Throughout history, trade between places has necessitated labelling of containers to indicate their contents. Seals at sites of the ninth century BC Harappan civilization of South Asia record the owner and/or contents of the containers (Hadden, 1986:3). The Pure Food and Drug Act, the first labelling law with national scope in the United States, was passed in 1906. Common law covering the workplace in a number of countries has traditionally required that employers notify workers about significant dangers that they encounter on the job, an obligation formally extended to chronic hazards in the OSHA's Hazard Communication regulation of 1983 in the United States. In this sense, risk communication is probably the oldest way of risk manage­ ment. However, it is only until recently that risk communication has attracted the attention of regulators as an explicit alternative to the by now more common and formal approaches of standard setting, insuring etc. (Baram, 1982).