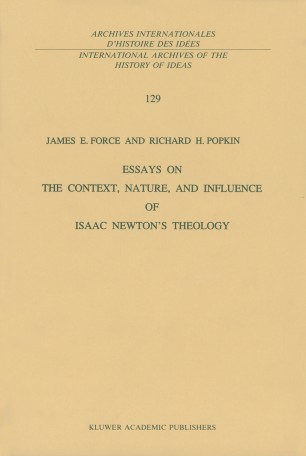 Essays on the Context, Nature, and Influence of Isaac Newton’s Theology

This collection of essays is the fruit of about fifteen years of discussion and research by James Force and me. As I look back on it, our interest and concern with Newton's theological ideas began in 1975 at Washington University in St. Louis. James Force was a graduate student in philosophy and I was a professor there. For a few years before, I had been doing research and writing on Millenarianism and Messianism in the 17th and 18th centuries, touching occasionally on Newton. I had bought a copy of Newton's Observations upon the Prophecies of Daniel, and the Apocalypse of St. John for a few pounds and, occasionally, read in it. In the Spring of 1975 I was giving a graduate seminar on Millenarian and Messianic ideas in the development of modem philosophy. Force was in the seminar. One day he came very excitedly up to me and said he wanted to write his dissertation on William Whiston. At that point in history, the only thing that came to my mind about Whiston was that he had published a, or the, standard translation of Josephus (which I also happened to have in my library. ) Force told me about the amazing views he had found in Whiston's notes on Josephus and in some of the few writings he could find in St. Louis by, or about, Whiston, who was Newton's successor as Lucasian Professor of mathematics at Cambridge and who wrote inordinately on Millenarian theology.