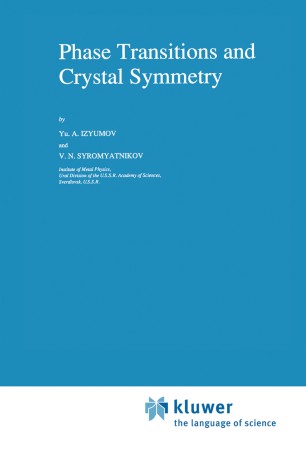 About half a century ago Landau formulated the central principles of the phe­ nomenological second-order phase transition theory which is based on the idea of spontaneous symmetry breaking at phase transition. By means of this ap­ proach it has been possible to treat phase transitions of different nature in altogether distinct systems from a unified viewpoint, to embrace the aforemen­ tioned transitions by a unified body of mathematics and to show that, in a certain sense, physical systems in the vicinity of second-order phase transitions exhibit universal behavior. For several decades the Landau method has been extensively used to an­ alyze specific phase transitions in systems and has been providing a basis for interpreting experimental data on the behavior of physical characteristics near the phase transition, including the behavior of these characteristics in systems subject to various external effects such as pressure, electric and magnetic fields, deformation, etc. The symmetry aspects of Landau's theory are perhaps most effective in analyzing phase transitions in crystals because the relevant body of mathemat­ ics for this symmetry, namely, the crystal space group representation, has been worked out in great detail. Since particular phase transitions in crystals often call for a subtle symmetry analysis, the Landau method has been continually refined and developed over the past ten or fifteen years.