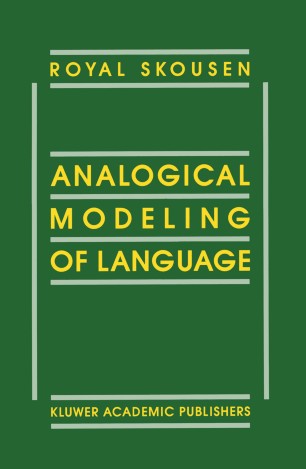 1. Structuralist Versus Analogical Descriptions ONE important purpose of this book is to compare two completely dif­ ferent approaches to describing language. The first of these approaches, commonly called stnlctllralist, is the traditional method for describing behavior. Its methods are found in many diverse fields - from biological taxonomy to literary criticism. A structuralist description can be broadly characterized as a system of classification. The fundamental question that a structuralist description attempts to answer is how a general contextual space should be partitioned. For each context in the partition, a rule is defined. The rule either specifies the behavior of that context or (as in a taxonomy) assigns a name to that context. Structuralists have implicitly assumed that descriptions of behavior should not only be correct, but should also minimize the number of rules and permit only the simplest possible contextual specifications. It turns out that these intuitive notions can actually be derived from more fundamental statements about the uncertainty of rule systems. Traditionally, linguistic analyses have been based on the idea that a language is a system of rules. Saussure, of course, is well known as an early proponent of linguistic structuralism, as exemplified by his characterization of language as "a self-contained whole and principle of classification" (Saussure 1966:9). Yet linguistic structuralism did not originate with Saussure - nor did it end with "American structuralism".

`Skousen develops an analogical approach, which is claimed to handle not merely cases which are problematic for tructuralist approaches, but to be applicable equally to the cases with which structuralism is at its best - in short, to be an Einstein to the common Newton.
This is altogether a stimulating and richly suggestive book whose fundamental notions are presented with formal rigour. Other, more psychologically adequate, formal analogical theories may be devised, but Skousen has shown the way forward.'
Artificial Intelligence and Stimulation of Behaviour Quarterly, 1990, No. 72
Buy options