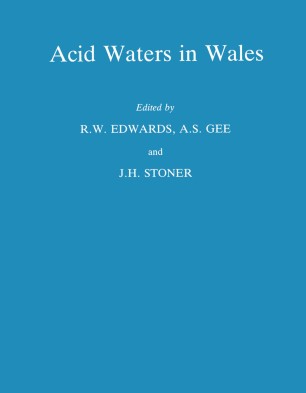 This book brings together research into the process of stream acidification and its impact on Welsh surface waters, carried out over the past decade or so. It is perhaps surprising that not until the 1980's was clear evidence of stream acidification assembled. In Wales, concerns over pollution had focused water quality sampling principally on the areas of traditional heavy industry and large urban popula­ tions served by inadequate sewerage systems and sewage disposal arrange­ ments. Mistakenly, it had been assumed that, with its prevailing westerly winds, Wales would receive precipitation substantially unpolluted by the industrial and urban emissions from Britain and mainland Europe. Assurance of the high quality of Welsh upland streams, the traditional nursery ground of salmonids, was eroded particularly by studies in the vicinity of Llyn Brianne reservoir in the catchment of the River Tywi of Central Wales. These demonstrated a clear correspondence between the biological quality and fisheries of streams in the catchment and aspects of stream chemistry, par­ ticularly pH, aluminium and calcium on the one hand, and catchment land­ use on the other. It is salutary to record that the first signals were of an inexplicable failure of the runs of migratory salmonids into the upper catchment, occupied by the Llyn Brianne reservoir and its influent streams, and the failure to restore the fishery by re-stocking with eggs and fry. Only then did the significance of the recent decline in some other upland lake and reservoir fisheries in Wales become apparent.