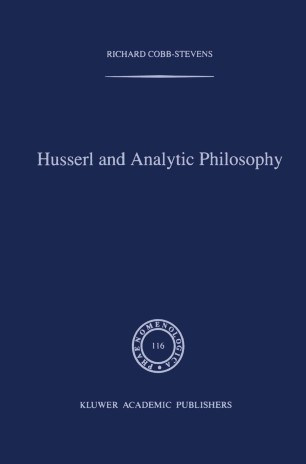 The principal differences between the contemporary philosophic traditions which have come to be known loosely as analytic philosophy and phenomenology are all related to the central issue of the interplay between predication and perception. Frege's critique of psychologism has led to the conviction within the analytic tradition that philosophy may best defend rationality from relativism by detaching logic and semantics from all dependence on subjective intuitions. On this interpretation, logical analysis must account for the relationship of sense to reference without having recourse to a description of how we identify particulars through their perceived features. Husserl' s emphasis on the priority and objective import of perception, and on the continuity between predicative articulations and perceptual discriminations, has yielded the conviction within the phenomenological tradition that logical analysis should always be comple­ mented by description of pre-predicative intuitions. These methodological differences are related to broader differences in the philosophic projects of analysis and phenomenology. The two traditions have adopted markedly divergent positions in reaction to the critique of ancient and medieval philosophy initiated by Bacon, Descartes, and Hobbes at the beginning of the modern era. The analytic approach generally endorses the modern preference for calculative rationality and remains suspicious of pre-modern categories, such as formal causality and eidetic intuition. Its goal is to give an account of human intelligence that is compatible with the modern interpretation of nature as an ensemble of quantifiable entities and relations.