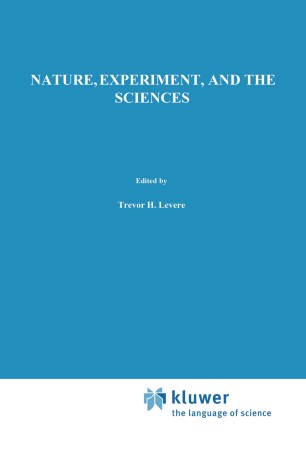 Nature, Experiment, and the Sciences

Part of the Boston Studies in the Philosophy of Science book series (BSPS, volume 120)

This collection of essays is a tribute to Stillman Drake by some of his friends and colleagues, and by others on whom his work has had a formative influence. It is difficult to know him without succumbing to his combination of discipline and enthusiasm, even in fields remote from Renaissance physics and natural philosophy; and so he should not be surprised in this volume to see emphases and methods congenial to him, even on topics as remote as Darwin or the chemical revolution. Therein lies whatever unity the discerning reader may find in this book, beyond the natural focus and coherence of the largest section, on Galileo, and the final section on Drake's collection of books, a major and now accessible resource for research in the field that he has made his own. We have chosen, as the occasion for presenting the volume to Stillman Drake, Galileo's birthday; Galileo has had more than one birthday party in Toronto since Drake came to the University of Toronto. As for the title, it reflects a shared conviction that experiment is the key to science; it is what scientists do. Drake has already asserted that emphasis in the title of his magisterial Galileo at Work, and we echo it here. Those who have had the privilege and pleasure of working and arguing with Stillman over the years know his tenacity, penetration, and vigour. They also know his generosity and humility. We owe him much.