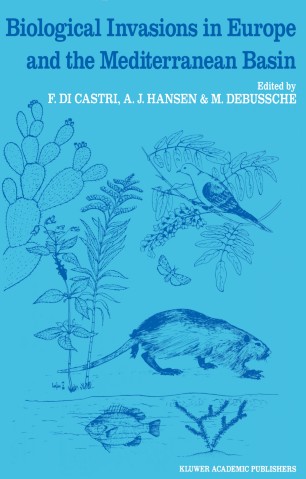 Biological Invasions in Europe and the Mediterranean Basin

In view of the massive change in the area of distribution of many world biota across classical biogeographical realms, and of the drastic restructuring of the biotic components of numerous ecosystems, the Scientific Committee on Problems of the Environment (SCOPE) decided at its general Assembly in Ottawa, Canada, in 1982 to launch a project on the 'Ecology of Biological Invasions'. Several regional meetings were subsequently organized within the framework of SCOPE, in order to single out the peculiarities of the invasions that took place in each region, the behaviour of their invasive species and the invasibility of their ecosystems. Most noteworthy among such workshops were one in Australia in August 1984, one concerning North America and Hawaii in October 1984, and one dealing with southern Africa in November 1985. A leitmotiv of these workshops was that most of the invasive species to those regions were emanating from Europe and the Mediterranean Basin, inadvertently or intentionally introduced by man. It was therefore considered as a timely endeavour to organize the next regional meeting in relation to this region. The workshop on 'Biological Invasions in Europe and the Mediterranean Basin' was held in Montpellier, France, 21 to 23 May 1986, thanks to the financial support of SCOPE and of the A.W. Mellon Foundation, and the logistic facilities of the Centre National de la Recherche Scientifique (C.N .R.S.).