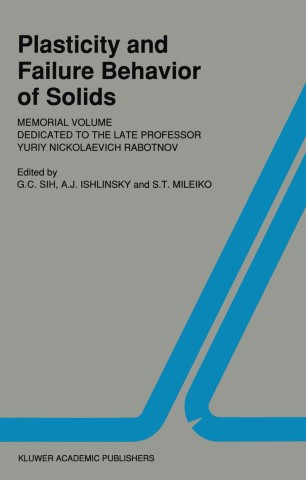 Plasticity and failure behavior of solids

Part of the Fatigue and Fracture book series (FAAF, volume 3)

More than six years ago, several of Rabotnov's close friends and colleagues from the USSR and USA decided to contribute a volume on Plasticity and Failure of Solids in honor of his 70th birthday. The celebration was interrupted unexpectedly by his death on May 13, 1985 at which time another decision was made still to publish the work, but as a memorial volume. As in any field of scientific endeavor, research confronts the scientists with anomalies; our chosen area is no exception. The ways in which failure criteria and plasticity theory are combined can differ widely among the researchers; they will never yield quite the same results. Each of the invited contributors has, therefore, been encouraged to express his views and to expound on his personal opinion. The contributors are free of enumeration from the authority and/or consensus of any scientific society or community. What impedes scientific process is the esoteric tradition of accepting ideas and theories by consensus among members of societies and communities. The absence of such a trend is refreshing; the collaboration between the authors from the USSR and the USA had to be one of the contributing factors. Finally, the editors wish to acknowledge the authors who have made the publication of this volume possible. a. c. Sib S. T. Mileiko AJ. Ishlinsky xi The late Professor Yuriy Nickolaevich Rabotnov (February 24, 1914 - May 13, 1985) xii Scientific biography of the late academician Yu. N.