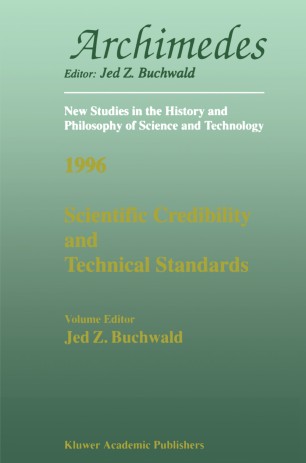 The articles in this first volume of ARCHIMEDES explicitly and intentionally cross boundaries between science and technology, and they also illuminate one another. The first three contributions concern optics and industry in 19th century Germany; the fourth concerns electric standards in Germany during the same period; the last essay in the volume examines a curious development in the early history of wireless signalling that took place in England, and that has much to say about the establishment and enforcement of standard methods in a rapidly-developing technology that emerged out of a scientific effect. Historical work over the last few decades has shown that technology cannot be characterized simply, or even usually, as applied science. The beliefs, the devices, and the natural objects that are created or discovered by scientists, often play altogether minor roles in the construction of technologies. Taking this realization as a given, the essays in Scientific Credibility and Technical Standards effectively argue that we must now seek to go beyond it; we must also begin to think carefully about the role that science actually did play when it was explicitly deployed by technologists.