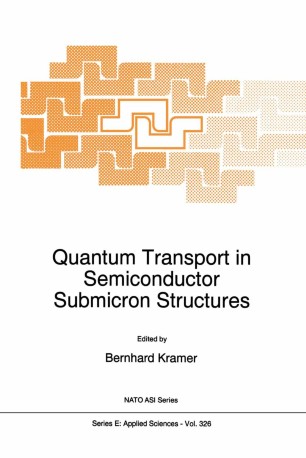 The articles in this book have been selected from the lectures of a NATO Advanced Study Institute held at Bad Lauterberg (Germany) in August 1995. Internationally well-known researchers in the field of mesoscopic quantum physics provide insight into the fundamental physics underlying the mesoscopic transport phenomena in structured semiconductor inversion layers. In addition, some of the most recent achievements are reported in contributed papers. The aim of the volume is not to give an overview over the field. Instead, emphasis is on interaction and correlation phenomena that turn out to be of increasing importance for the understanding of the phenomena in the quantum Hall regime, and in the transport through quantum dots. The present status of the quantum Hall experiments and theory is reviewed. As a "key example" for non-Fermi liquid behavior the Luttinger liquid is introduced, including some of the most recent developments. It is not only of importance for the fractional quantum Hall effect, but also for the understanding of transport in quantum wires. Furthermore, the chaotic and the correlation aspects of the transport in quantum dot systems are described. The status of the experimental work in the area of persistent currents in semiconductor systems is outlined. The construction of one of the first single-electron transistors is reported. The theoretical approach to mesoscopic transport, presently a most active area, is treated, and some aspects of time-dependent transport phenomena are also discussed.