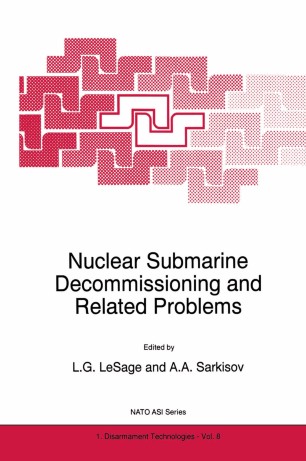 The Advanced Research Workshop on "Nuclear Submarine Decommissioning and Related Problems" was held at the Russian Academy of Sciences in Moscow, Russia on June 19-22, 1995. On June 17 and 18, 1995 some of the workshop participants visited the Zwezdochka Shipyard at Severodvinsk which is a repair and dismantlement facility for Russian nuclear submarines. Attendance at the workshop was approximately 115 with participants from Russia, United States, France, Norway, Canada, Denmark, Sweden, Estonia, and Germany. The workshop was sponsored by the Disarmament Panel of North Atlantic Treaty Organization (NATO) Science Committee. The sponsorship and the financial support of NATO is gratefully acknowledged. The workshop was organized in Russia by the Nuclear Safety Institute of the Russian Academy of Sciences (IBRAE). The efforts of many individuals from IBRAE in producing both a technically challenging workshop and an almost flawless one are also gratefully acknowledged. In addition, the support of the Russian Academy of Sciences, the State Committee of the Russian Federation on Defense Technologies, the Ministry of the Russian Federation on Atomic Energy, the Navy of the Russian Federation, and the United States Department of Energy is acknowledged. xi CURRENT STATUS OF NUCLEAR SUBMARINE DECOMMISSIONING PROBLEMS OF NUCLEAR SUBMARINE DECOMMISSIONING AND RECYCLING N. I. SHUMKOV State Committee for Defense Industry (Goseomoboronprom) Moscow, Russia 1. General Description of the Problem Undoubtedly, the problem of nuclear submarine decommissioning and recycling has been worrying Russian civil and military specialists involved in development, building and operation of submarines for many years.